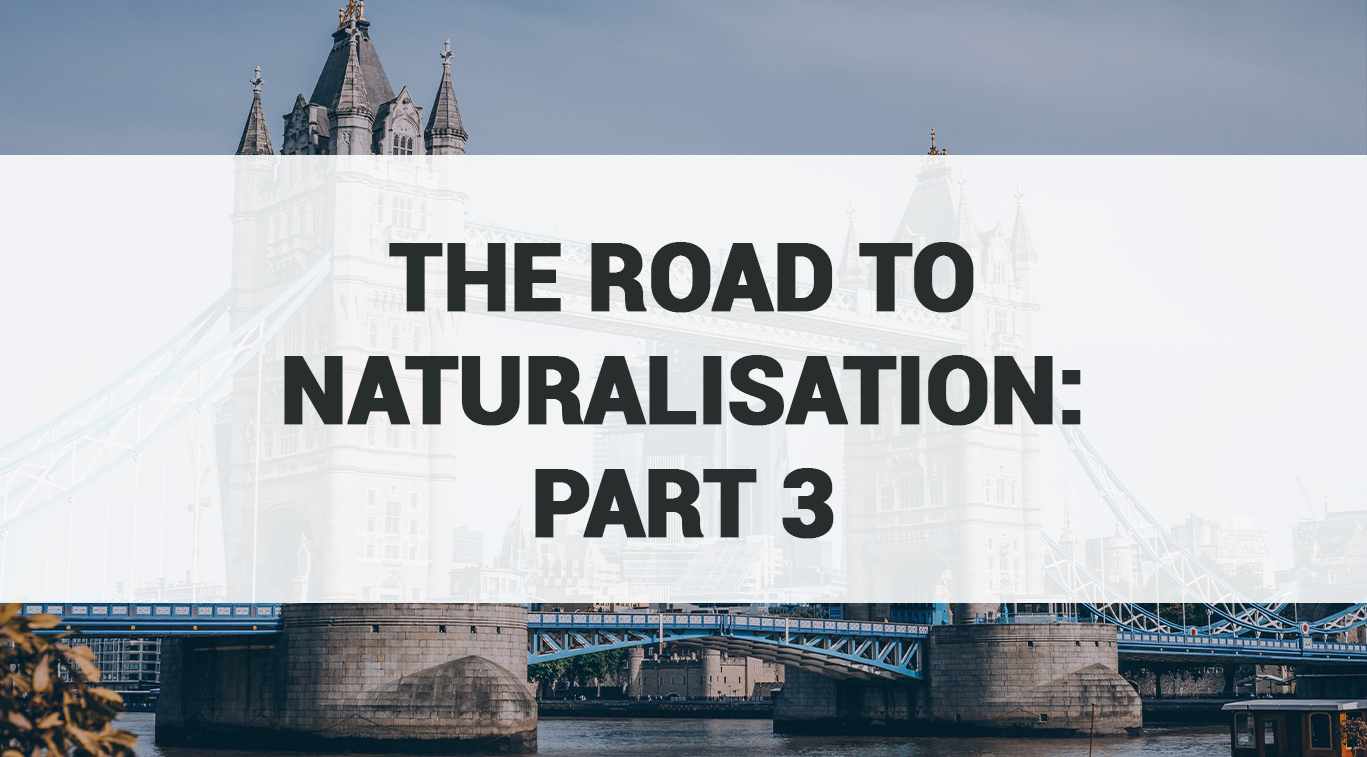 In previous posts on the matter of naturalisation as a British Citizen, I have mentioned, but not analysed, the requirement set out in Schedule 1 of the British Nationality Act 1981 that anyone applying to naturalise as a British Citizen must be “of good character”, otherwise the application will be refused. Now referred to as ‘the good character requirement’, it was one of the vaguer, more subjective aspects of naturalisation.

What is the Good Character Requirement?

The list of character factors in the guidance is non-exhaustive but provides a good indicator of the kind of things the Home Office is looking out for. Some of the factors are fairly uncontroversial, such as terrorism or war crimes. Others, such as issues of debt and guilt by association, are less clear-cut and need to be carefully considered on a case-by-case basis. The non-exhaustive list is as follows:

This is a broad outline of the criteria and therefore not everything that is cited as grounds for refusal on the basis of bad character will neatly fit into these categories. The standard of proof for deciding good character is on the balance of probabilities (i.e. whether it is more likely or not).

What needs to be disclosed

Because the good character requirement effectively means ‘not of bad character’, many people can simply assert their good character and that will be accepted. If you have never committed any kind of criminal offense, have always complied with the immigration rules, have kept a sound grip on your finances, never tried to defraud anyone (especially the UK government), and have not made yourself a nuisance to others, you do not have to really do anything about this, as the lack of evidence of bad character will lead the UK government to conclude they like the cut of your jib (hopefully).

Criminal convictions must be disclosed and, depending on their severity, will normally lead to a refusal (more on that later). This includes pending convictions, convictions from outside the UK, and convictions with no prison sentence. While not technically convictions, things like warnings, reprimands, cautions, fixed penalty notices, and other road traffic offences (or their international equivalents) should be disclosed, especially as they will almost certainly not lead to a refusal (the exceptions are when the non-payment of a fine led to further criminal proceedings or the person has a large number of them). You also need to disclose judgments, orders, and penalties issued against you by the civil courts, bankruptcy and winding-up orders, any other kind of ban or criminal order (such as a travel ban or notification order), spent convictions (old convictions that you no longer have to declare for other purposes) and any kind of pending legal proceedings. The bottom line is that it is generally prudent to overshare when it comes to disclosing potential indications of bad character, as hiding something may end up being worse for your application.

Things that will lead to a refusal

It may be surprising to learn that involvement in terrorism or war crimes will almost certainly lead to an application being refused. If you are concerned that your application may fail on this ground, you should seek legal advice, as this may be a bit beyond the remit of this blog.

Criminal convictions will lead to an application being refused depending on their severity and when they happened. The threshold is:

·         Custodial sentence of fewer than twelve months = refusal unless ten years have passed;

It should be noted that the whole sentence is considered, not actual time served. So, if you were convicted of a crime and sentenced to two years in prison but released after twelve months due to good behaviour, your application will still be refused unless fifteen years have passed. The Home Office still retains the discretion to refuse an application on the basis of persistent offending, the impact on the public, or an escalation in the seriousness of offences, among other things, after the aforementioned time limit. It is also possible for an application to be refused when there is no conviction if there is enough evidence to suggest that on the balance of probabilities the person is engaged in criminal activity.

Breaches of immigration law will also usually result in a refusal. A sham marriage, cheating on the Life in the UK test and/or the language test, entering the UK illegally, lying in a visa application, absconding, illegal working, non-compliance with the requirements of a previous visa, overstaying or being deprived of citizenship due to dishonesty are among the many immigration breaches that will probably result in a refusal unless there is a particular reason not to. A breach will generally only be taken into consideration if it was discovered in the ten-year period before the application. Helping others evade immigration control, hiring undocumented workers, or citizenship deprivation on “conducive to the public good” grounds (i.e. due to a serious criminal offence or terrorist act) will mean you are effectively prohibited from ever being granted British Citizenship.

Finally, deception and dishonesty will usually lead to a refusal. Specifically, this relates to deception and dishonesty with the UK government, either in your naturalisation application, a previous immigration application, or some other dealing with the government (falsely claiming welfare is a prime example). It is unimportant whether the deception was successful or not, attempting it is grounds for refusal. Deception will generally only lead to refusal if it was discovered in the ten-year period before the application. If deception is discovered after the application has been approved, the Home Office can deprive that person of their citizenship.

Things that may lead to a refusal

These factors will not usually lead to a refusal. Rather, they can be deemed signs of bad character on a case-by-case basis, assuming there is no criminality involved.

One of these is financial soundness. Home Office guidance states that signs of a lack of financial soundness can include bankruptcy, being a director of a liquidated company, significant debt (including NHS debt), fraud relating to public funds and services, and non-payment of council tax. In these cases, the levels of recklessness and irresponsibility are assessed. A person who recklessly builds up unsustainable debts or whose irresponsibility leads to the liquidation of a company will probably be refused. Otherwise, a lack of financial soundness that does not involve criminal behaviour is unlikely to lead to a refusal.

The other thing that may lead to refusal is notoriety, which is defined in the official guidance as being well-known for some bad quality or immoral deeds. This does not have to include criminal behaviour, although it has to be bad enough to warrant refusing a person’s British Citizenship. The examples offered are publicly expressing unsavory views, persistent anti-social behaviour, and deliberate flouting of the law. Once again, whether someone’s notoriety will lead to a refusal depends on its scale and nature. The guidance is careful to clarify it only considers notoriety that is based on fact and not unsubstantiated rumours, especially if they are malicious and/or harmful.

The official guidance only gives examples of bad character that can lead to refusal. Case law, however, has determined the Home Office must consider all aspects of a person’s character as a whole. This includes balancing the evidence of bad character with a person’s good character and deeds, such as volunteering, charity work, positive character references, and other such things. While you do not have to submit evidence of good character, it is a good idea to do so, especially if you have done something mentioned in previous paragraphs.

Stateless people and people with no other citizenship are exempted from the good character requirement, as are those who are not already British Citizens as the result of historical unfairness.

Similarly, there are situations where the Home Office can choose to ignore potential the bad character of an individual application. Crimes committed in other countries that would not be crimes in the UK, such as homosexuality or trade union membership, are usually not considered. A conviction that happened in isolation can be disregarded if there is evidence to suggest the person is otherwise of good character, especially if it happened a long time ago. Accusations of deception and dishonesty, meanwhile, can be countered with evidence showing that it was a genuine mistake and not deliberate while overstaying can be disregarded in certain cases if it is the only ground for refusal of an application.

Finally, the high level of discretion given to the Home Office when assessing bad character means that if you are able to make a compelling case for why, despite the evidence, you are of good character, an exception may be made for you.